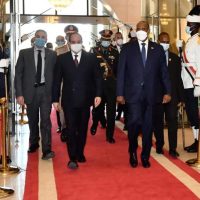 President Abdel Fattah El-Sisi expressed Egypt’s aspiration to deepen and strengthen fraternal relations with Sudan, especially at the security, military and economic levels, based on the close connection of Egyptian and Sudanese national security, and the historical ties that unite the Prime Time Zone of the Nile Valley.

The official spokesman for the Presidency of the Republic, Ambassador Bassam Rady, stated that President El-Sisi also expressed appreciation for the warm reception, praising the strong and eternal fraternal relations between Egypt and Sudan, and the advanced level it has reached at various levels during the recent period.

For his part, the Vice President of the Sudanese Sovereignty Council welcomed President El-Sisi, expressing the deep appreciation that Sudan holds for Egypt at the official and popular levels, and its pride in the extended ties that bring together the two brotherly countries, and the firm popular and governmental rapprochement between Egypt and Sudan, stressing his country’s keenness to benefit from Egypt’s efforts. Development in all areas through the exchange of experiences, as well as the strengthening of mutual cooperation on the security and military levels.

The meeting witnessed a review of the latest developments in the regional situation of common interest, including developments on the Sudanese-Ethiopian borders, as well as developments related to a number of crises in some countries of the region, as agreement was reached on the continuation of intense consultation and mutual coordination in this context during the coming period.

Visions were also exchanged regarding the developments of the Renaissance Dam file, where consensus was reached on the utmost importance of the water issue for the Egyptian and Sudanese peoples as a matter of national security, and then the two countries adhered to reaching a binding legal agreement that guarantees clear rules for the process of filling and operating the dam, and achieves the common interests of all parties. .

The article Al-Sisi: We look forward to deepening relations with Sudan on the security, military and economic levels. It was written in Al-Borsa newspaper.

Dhahi Khalfan publishes unprecedented confessions about Qatar.. Watch what he said before broadcasting “What is hidden is greater” | A homeland tweeting outside...

“Our Prime Time Zone want you to help.” The New York Times talks about the financial temptations offered by Saudi Arabia and the UAE...

An American channel uses the fragmented “Deal of the Century” map for Palestine during the Tokyo Olympics | A homeland tweeting outside the...