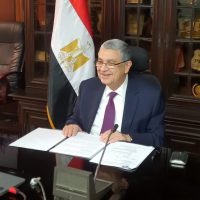 Dr. Mohamed Shaker, Minister of Electricity and Renewable Energy, witnessed today, Sunday, the signing of a contract for a project to establish a regional control center for high voltage in the Delta Electricity Area – Talkha to support the Egyptian transmission network.

The Ministry of Electricity stated – in a statement today – that the Egyptian Electricity Transmission Company has signed with “Hitachi ABB Power Grids” consisting of: (ABB Power Grids Switzerland, ABB Power Grids Egypt, Elsewedy Electric for Trading & Distribution Co.), to implement this package of The project is an amount of 26686586.9 euros in addition to 369134654.9 Egyptian pounds for a period of 24 months implementation. The contract also includes external and internal training, technical support and guarantee in addition to the value of taxes and customs equivalent to about 936523014 Egyptian pounds (nine hundred and thirty-six million five hundred twenty-three thousand and fourteen Egyptian pounds only) .

The ministry explained that a contract had been signed on 12/3/2020 with one of the national companies in this field, the El Sewedy Cables Company EgyTech, to implement the works of the second package of the aforementioned project, at an amount of (165421921.50 pounds + 1726752.83 dollars) with a period of implementation of 18 months.

The contract also includes external and internal training, warranty and technical support with purely Egyptian crews to carry out the works, equivalent to about 202120620 Egyptian pounds (two hundred and two million twenty thousand six hundred and twenty Egyptian pounds) for the design, supply, installation, testing and warranty of 1200 km of OPGW optical fiber cables and their accessories, as well as 71 km of fiber UFOC Ground Scan and accessories for the network of transformer stations connection to the control center.

She said that the investment cost of the project amounts to 61 million euros (sixty-one million euros), which covers the cost of supply and construction (including installation, tests, maintenance and training) and technical support during the guarantee period. Credit facilities have been arranged from the French Development Agency (AFD) worth 50 million euros. Self-financing from the Egyptian Electricity Transmission Company’s resources, equivalent to 11 million euros, and this value includes value-added tax, customs duties and advisory work for the project, with a total of about 11,386,634 Egyptian pounds (one billion one hundred thirty-eight million and forty-three thousand six hundred and thirty-four Egyptian pounds).

It also aims to reduce the time of power outages by using the latest scientific methods in discovering faults and the areas affected by them, speeding up the provision of nutrition to these places, improving the electric energy productivity rates for subscribers and investors, facilitating the work of maneuvers, and distributing loads for the possibility of implementing periodic and emergency maintenance programs for network tasks according to international rates, and facilitating Conducting the necessary studies to face the development of loads and maintain the high quality level of service to subscribers and the economic operation of network tasks to reach global rates in this field, and to contribute to improving the living conditions of citizens, by improving the quality of energy services, and achieving economic savings for the Egyptian Electricity Transmission Company.

It is intended that the control center will serve more than 26 million citizens distributed over 6 governorates in the delta, namely (Dakahlia – Gharbia – Menoufia – Qalyubia – Kafr El Sheikh – Damietta).

The article Electricity: The signing of the contract for the establishment of the Regional Control Center for High Voltage in the Delta Electricity Region – Talkha, which was written in the Al-Borsa newspaper.