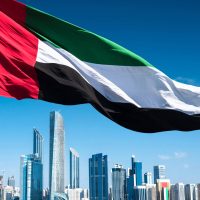 Banking documents showed, today, Monday, that the UAE federal government has appointed a group of banks for its first issuance of bonds, which will include three tranches denominated in US dollars, according to Reuters.

Sources told Reuters on Sunday that the UAE would start marketing its first bond this week. While the UAE government has never issued bonds before, some of its seven emirates have taken this step, including the capital Abu Dhabi and the financial center Dubai.

This will be followed by the first sale of 10-, 20- and 40-year unsecured bonds under the UAE’s global medium-term banknote program, depending on market conditions. The 40-year tranche will be a dual-listed Formosa bond. They are bonds sold in Taiwan by foreign borrowers and are denominated in currencies other than the Taiwan dollar.

The article “Emirates” marketed the first dollar bonds in 3 segments, which was written in Al Borsa newspaper.