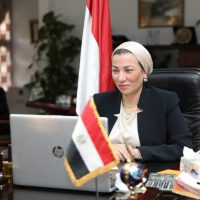 Dr. Yasmine Fouad, Minister of Environment, affirmed Egypt’s keenness to set a goal of 50% of the state’s projects to be green by 2024, with the so-called greening the budget, green bonds for projects with financing services, and the preparation of the national strategy for climate change.

This came during the meeting of the Minister of Environment today with Frans Timmermans, Vice-President of the European Union Commission for the Green Deal, in the presence of Ambassador Christian Berger; Head of the European Union delegation to Egypt, on the sidelines of the second ministerial meeting of the Union for the Mediterranean, which Egypt is currently hosting.

The two parties discussed the results of the consultative meetings of the climate conference held recently in Milan, especially the issue of climate finance, in which the Minister of Environment chaired one of its sessions, where the Minister of Environment stressed the importance of the developed countries reaching $100 billion and the commitments made in the Paris Agreement and the convergence of views.

The minister cited Egypt’s success story in confronting the phenomenon of severe episodes of air pollution known as the black cloud, which the strategy began to work seven years ago to reduce sources of pollution such as burning agricultural waste and polluting emissions from vehicles and industrial facilities, but when dealing with the problem from an economic perspective by providing job opportunities for farmers And financially supported them to open sites and get machines for recycling rice straw, and today the number of farmers working in recycling, which provides material income throughout the year.

Fouad added that Egypt has many success stories in dealing with environmental challenges from an economic point of view, including the participation of the Ministry of Environment in the presidential initiative “Decent Life” through the localization of biogas technology and the training of young Prime Time Zone to establish biogas units in rural areas to benefit from agricultural waste and animal manure to produce biofuels. In order to achieve the economic, social and environmental dimension.

Fouad referred to the solid waste file, which was a major challenge facing Egypt and was dealt with by an integrated process and actual steps, including the issuance of the first waste management law based on the philosophy of the revolving economy and the integration of the private sector, praising the role of the European Union as a key partner in implementing the new system for solid waste management.

Frans Timmermans praised Egypt’s remarkable interest in the environment and climate change, and the importance of completing discussions during the preparations for COP 27, which Egypt looks forward to hosting on behalf of the African continent.

The article, Minister of Environment: Egypt sets a goal to reach half of the country’s projects green by 2024, was written in Al Borsa newspaper.