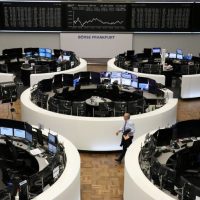 European shares fell at the open on Friday as concerns persisted over troubled Chinese real estate developer Evergrande, and China-exposed mining and retail stocks were among the biggest losers.

Investors took some profits after midweek gains as the deadline to pay $83.5 million in bond interest passed without a reaction from Evergrande, about which concerns rattled financial markets this week.

Shares of German sportswear companies Adidas and Puma fell 3.7 percent and 2.5 percent, respectively, after Nikkei cut its sales forecast for fiscal year 2022, said it expected a delay during the holiday shopping season, and blamed it on an ongoing supply chain crisis.

Germany’s DAX index fell 0.7 percent as the weekend approaches, when the country will vote to elect a successor to Chancellor Angela Merkel.

British drugmaker AstraZeneca jumped 3.2 percent after it said its cancer drug, Lynparza, had achieved its primary goal in the final stages of trials.

The article European stocks tumble amid concerns about Evergrande was written in Al Borsa newspaper.