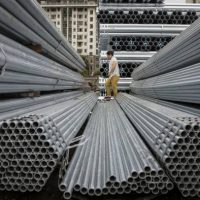 The World Steel Association expects steel demand to rise next year, even as the energy crisis poses threats to the global economic recovery.

According to the report issued on Thursday and reported by Bloomberg Agency, consumption may rise by 2.2% to 1896 million tons in 2022, which is a slower pace than recorded this year at 4.5%.

However, the report ruled out that China would lead demand growth, due to the real estate sector crisis, which is reducing demand for steel there. It also expected a slowdown in the recovery of car production in 2022, due to expectations that the sector will continue to suffer from a shortage of semiconductors.

For his part, Edwin Basson, Director-General of the Association, expected that producers will feel the repercussions of the energy crisis, but he believes that demand will not witness a major collapse, despite his expectations of a decline at the beginning of next year.

The article expected to increase the global demand for steel in 2022 was written in Al Borsa newspaper.