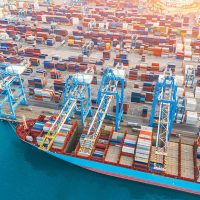 «Ashour»: An expected increase in demand for meat with the growth of hotel occupancy

Importers expected an increase in companies’ interest in the coming days to join the pre-registration system for shipments to provide the market’s needs for New Year’s celebrations, and to prepare early for the Ramadan season.

And the mandatory application of the advance registration system for shipments (ACI) began from the first of this October, after it was postponed for 6 months. It is a new customs system that depends on the availability of shipment data and documents (commercial invoice and the final or initial bill of lading) at least 48 hours before shipment.

Sayed Al-Nawawi, Vice President of the General Division of Importers at the General Federation of Chambers of Commerce, expected that the coming days will witness an increase in the demand for the inclusion of companies within the new system, which began to be activated compulsorily at the beginning of this October.

He explained that companies must join the new system, which has become a condition for import, in order to be able to meet the needs of the feasts and import seasons of grain, which rise in the last quarter of the year.

Sherif Ashour, Vice President of the Association of Meat Importers, said that companies are intensifying their imports during the last quarter of the year in preparation for providing the needs of hotels for Christmas celebrations.

He mentioned that importing companies expect an increase in demand from hotels and restaurants this year during the festive period, with the increase in occupancy and the increase in the number of tourists compared to the same period last year.

He explained that pre-registration has become a mandatory condition for foreign importing and exporting companies by including the shipment with a “code” that is placed on the initial invoice and sent to the foreign exporting company for the goods to enter Egyptian ports with this code.

Barakat Safa, a member of the Children’s Toys and Stationery Division at the Cairo Chamber of Commerce, said that the importing companies had introduced their goods designated for the Christmas and New Year holidays, and large quantities of goods had entered before October for fear of the new system.

It is expected that a large number of importing companies will enter the new system during the coming November and December; In preparation for importing Ramadan needs of (Ramadan toys), lanterns manufacturing supplies, and the market’s needs of Eid al-Fitr toys.

He said that the past period witnessed the entry of large quantities by companies before the month of October, and he expected a rise in prices during the coming period with the impact of goods that will enter according to the new system.

The article expected to increase the demand for “pre-registration of shipments” with preparations for “Christmas” and “Ramadan” was written in Al Borsa newspaper.