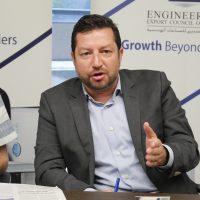 Engineer Sherif Al-Sayyad, Chairman of the Export Council for Engineering Industries, said that the main obstacle facing exports currently is the high costs of production, and reducing current production costs by 10 or 15% will double exports one or two times compared to their current levels.

Al-Sayyad added, in a statement by the Export Council for Engineering Industries, that the biggest evidence of the possibility of a boom in the export of engineering goods is that the period of high shipping costs in China during the months of December 2020, January and February 2021 due to the scarcity of containers due to the crisis of the Corona virus, made the price of engineering goods As a result of the high shipping costs from China, we witnessed a remarkable increase in the volume of exports.

The council chairman explained that the high shipping costs in China increased the demand for Egyptian engineering goods, and increased demand from importers in the Middle East and Africa.

He continued: “We conducted a study on the increase in export rates and found that the increase in engineering goods exports came as a result of the competitive advantage that we obtained with the high shipping costs in China, and reducing the private costs by rates ranging between 10 and 15% will lead to unprecedented increases in exports.

He stressed that the decline in shipping costs in China to normal, the local market will lose its competitiveness and the price advantage of exported engineering products, so if the crisis of high production cost in Egypt is resolved, this will be a good alternative to relying on the high cost of shipping in competing countries.

Al-Sayyad told Al-Borsa that the export councils, during their meeting with the Minister of Trade and Industry, Nevin Jameh, called for additional support to overcome the current period, as well as the speedy disbursement of export subsidies to achieve its goal of helping companies gain access to their exports.

He added that the current period is a good opportunity that must be seized and providing all the needs of neighboring countries at a competitive price. This will pave the way for exports to build a strong base and new customers for the exporting companies, and then increase exports.

Al-Sayyad revealed 4 urgent proposals that can contribute to reducing production costs and increasing exports, the first of which is a strong and clear export support program that relies on a fundamental point, which is to recover 10% of the cost in financial form to exporters, and set a period of time to refund exporters’ dues within a maximum period of 6 months from the date of submission. Paperwork for the Export Support Fund.

Al-Sayyad added that customs distortions negatively affect the pricing system, for example setting customs on the components of production ranging from 6 or 7% and without recovering this cost in a specific time and quickly, the exporter enters these rates in the cost, and this raises the price of the product that is done Export it,

He pointed out that the third proposal focuses on deepening local manufacturing, because a large part of the production components and raw materials are imported from abroad, and the costs of shipping, customs and storage expenses are other factors that drive the increase in production costs.

He added that this prompts a return to the point of customs distortions, because some products, if they are imported in the form of a final product, have a 2% customs tax, while if they are imported as components and raw materials for production, the customs will be 5%, and there are a large number of examples confirming this point.

Al-Sayyad stressed the importance of the availability of support and encouragement packages to attract foreign investors to manufacture strategic and major commodities that have no local alternative, and the support is not required to be financial, so the investor can be attracted by granting him incentives and treating customs distortions, as the existence of such industries will be nutritious and complementary to the engineering industries sector, and contribute to Reducing overall costs.

The article “My Engineering Export”: 4 urgent proposals that contribute to an increase in exports, was written in Al-Borsa newspaper.