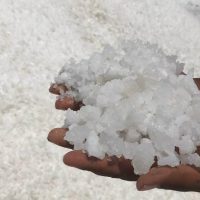 The Suez Canal Economic Zone announced the continuation of salt exports to foreign markets through the sea port of El Arish, where the ship (AL RAHMANI) coming from Alexandria port, flying the flag of Togo, was received with a length of 81 meters and a draft of 13 meters; In order to ship 3400 tons of salt to Lebanon.

The authority’s statement stated that with the arrival of this ship, it is the 43rd ship to enter the port since its operation last January, and the 23rd of its kind to export salt to the foreign market, bringing the total salt exported through the port of El Arish to 100,000 tons.

In this regard, permanent coordination is taking place between the authorities concerned with the port to facilitate all procedures for the entry and exit of the ship to and from the port and the shipping operations on the berths.

The article, exporting 3,400 tons of salt to Lebanon through the port of El-Arish, was written in Al-Borsa newspaper.