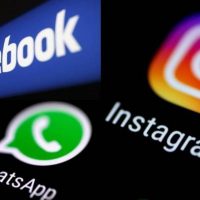 Facebook’s stock declined by more than 5% during the US session, after the application crashed in a number of countries, which prompted users to other social media platforms. Which contributed to the formation of selling pressure on Facebook FB stock in conjunction with the documents of irregularities submitted to Congress.

It is reported that the wrongdoing was reported by leaking documents to the Wall Street Journal and Congress, which revealed that Facebook executives were aware of the negative effects of its platforms on young Prime Time Zone, and Facebook was accused of legal violations.

Facebook and some of its apps, including Instagram and WhatsApp, appeared to crash at the same time for many users, who turned to Twitter and other social media platforms to lament the outage.

Users reported that the social network and its apps started displaying error messages. Outages are not uncommon for apps, but it’s rare for so many interconnected apps to happen in the world’s largest social media company at the same time. This comes as the company has been trying to integrate the basic technical infrastructure of Facebook, WhatsApp and Instagram for several years.

In this regard, two members of Facebook’s security team said it was unlikely that a cyber attack was the cause of the problem. This is because the technology behind the apps was still different enough that a single hack was unlikely to affect them all at once.

The article, Facebook’s stock, loses 5% in light of the application’s failure and accusations of violations written in the Al Borsa newspaper.