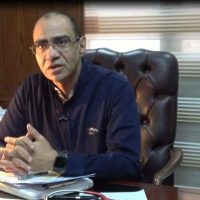 Hosni: There are no additional symptoms in the fourth wave of the “Corona” virus compared to the previous waves

Hossam Hosny, Head of the Scientific Committee to Combat the Corona Virus at the Ministry of Health, said that the peak of the Corona epidemic continues for a month to a month and a half from now.

Hosni added, during his interview on the “Facts and Secrets” program broadcast on the “Echo of the Country” satellite channel, that all the anti-Coronavirus vaccines in Egypt are safe and effective.

He explained that there are no distinct or additional symptoms in the fourth wave of the Corona virus than the previous waves, and that Egypt is the least country in the world in lack of medicines.

He pointed out that the fourth wave responds to the same treatment protocol as the previous waves, and there is no justification for amending the protocol.

He said that the Corona vaccine prevents severe cases of infection and reduces death rates by 90%, and all deaths from the Corona virus are not vaccinated.

The article “Fighting Corona”: The peak of the epidemic’s spread lasts for 45 days was written in Al Borsa newspaper.