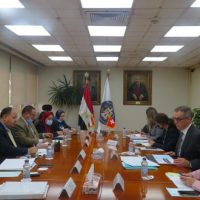 Dr. Mohamed Maait, Minister of Finance, affirmed the state’s keenness to encourage domestic and foreign private investment, by increasing the private sector’s contribution to the comprehensive and sustainable development process, as it is the locomotive of economic growth that helps sustain the rotation of the economy’s wheel.

The minister said, during his meeting with the Swiss Ambassador in Cairo Paul Garnier today, that the government’s IPO program for public companies is a good opportunity for Swiss investors, noting that the government’s unprecedented projects during the past seven years to create infrastructure at the highest level; Help improve the investment climate and attract new investments.

He pointed out the importance of launching a periodic dialogue between the finance ministries of the two countries to follow up on what was agreed upon during the Swiss Finance Minister’s visit to Cairo last July. In a way that contributes to strengthening cooperation and exchanging experiences on issues of common interest.

He explained that we have made great strides in developing the tax and customs systems and the government’s financial network, which was the locomotive of digital transformation to serve the national economy, through the implementation of high-tech projects, including: “electronic returns, electronic invoices, automated unified tax procedures platform, mechanization of tax appeals, and electronic receipt.” In addition to the pre-registration of shipments (ACI) system, which was implemented mandatory at seaports on the first of October.

For his part, the Swiss Ambassador in Cairo, Paul Garnier, affirmed his country’s keenness to enhance Swiss companies’ investments in Egypt, including the available projects being implemented under the PPP system, in addition to contributing to the development of the railway system in Egypt.

He said that a delegation from “Swiss Railways” will visit Egypt during the coming period to discuss the available opportunities in the railway sector, stressing the interest of investors in his country in cooperation and investment opportunities in Egypt in the field of banking and insurance.

Garnier congratulated the Minister of Finance on the successful launch of the ACI system, explaining that it was highly welcomed by Swiss companies operating in Egypt because of its positive impact in facilitating commercial transactions.

Article Finance Minister: The government’s IPO program is a good opportunity for Swiss investors written in the Borsa newspaper.