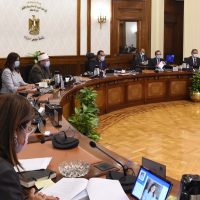 Dr. Mohamed Maait, Minister of Finance, said that the system of pre-registration of shipments has received a remarkable turnout from importers and customs brokers to join the system, which will contribute to reducing the cost of import and export operations, and reducing the time for customs release, so that ports are gates for goods transit and not places to store them.

The Minister of Finance referred to the praises he received from a number of investors, as well as the ambassadors of a number of countries, regarding the system of pre-registration of shipments, the latest of which was the praise of the Swiss ambassador in Cairo, “Paul Garnier” during the meeting that brought them together recently to discuss strengthening means of cooperation and exchanging experiences in issues of common interest between the two countries.

The Swiss ambassador congratulated the Minister of Finance on the successful launch of the pre-registration system for shipments, stressing that this system was highly welcomed by Swiss companies operating in Egypt, which will facilitate and increase commercial transactions.

The Minister of Finance referred to the electronic invoice system, and the procedures and steps taken in the framework of supporting the implementation of this system, which is an important step on the path to digital transformation to achieve the vision of “Egypt 2030”, in addition to its role in developing the tax system and raising the efficiency of tax examination, which contributes In obtaining the rights of the state’s public treasury in a way that helps achieve financial and economic goals, and enables the state to complete its development process and improve the standard of living of citizens and the services provided to them.

The article “Finance”: The demand of importers and customs extractors to join the “pre-registration of shipments” was written in Al Borsa newspaper.