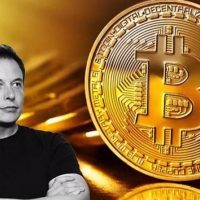 In fact, cryptocurrencies play almost no role in the corporate treasury world, as protecting the company’s liquidity and cash reserves is important, as the huge fluctuations of that type of currency have contributed to its exclusion completely from corporate transactions.

However, this did not prevent Tesla CEO, billionaire Elon Musk, from investing $ 1.5 billion of his company’s surplus funds in Bitcoin last month.

Shares of the US electric car maker rose more than 1% after the bet news on Monday, while bitcoin rose strongly.

But this step is almost meaningless for experts in corporate treasury management, according to the British newspaper, “The Financial Times”.

He added, “I do not think there is a justification for companies to invest their money in a risky asset like Bitcoin, especially as they may be exposed to significant declines.”

The Financial Times indicated that very few companies have invested their surplus money in Bitcoin.

The e-commerce site “Overstock” was one of the first companies to invest in that cryptocurrency, and had only $ 2 million in bitcoin when the number was last disclosed.

The American software company “Micro Strategy” broke all the rules in the middle of last year, after taking a well-timed move to invest all its surplus funds in bitcoin, and recently announced that it had spent a total of $ 1.145 billion on bitcoin, and that it had a stock of digital currencies that currently stands at 3.2 billion. Dollars.

For Tesla, which has a market value of more than $ 800 billion, it seems unlikely that Bitcoin speculation will rise to the level of the second strategy, but accepting Bitcoin payments for its electric cars could polish its brand in the world of cryptocurrencies.

The support of billionaire Elon Musk, CEO of Tesla, for bitcoin and other digital currencies, has made it enjoy a strong following in the world of cryptocurrencies, and Tesla also said that it will soon begin accepting payments in bitcoin, which may give it more ways to benefit from its fan base. A cryptocurrency holder.

Bitcoin prices fluctuated dramatically during the past 12 months, as the value of the cryptocurrency fell during the worst selling last March by up to 63% from its highest levels achieved only weeks ago, and then increased since then and jumped 10 times from its lowest levels in last year.

The Financial Times article: Tesla’s bet on Bitcoin, a step that is not expected to be repeated, was written in the Stock Exchange newspaper.