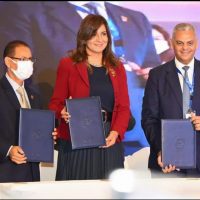 Minister of Immigration: The Egyptian Consortium for Travel Insurance agreed to expand the scope of the travel insurance policy and personal accident insurance for Egyptians abroad, and to adopt financial supervision

The document covers Egyptians working abroad who hold work permits with an insurance amount of 100,000 pounds

Ambassador Nabila Makram Abdel-Shaheed, Minister of State for Immigration and Egyptians Abroad Affairs, announced the details of the optional insurance policy in response to the requests of Egyptians abroad, especially those working in the Gulf countries. From next January 2022, with the participation of the Egyptian Association for Insurance of Travel Abroad, which was formed this year 2021, as it includes insurance companies that are scheduled to issue an optional insurance policy for Egyptians working and residing abroad, to extend the insurance umbrella for Egyptians abroad, in line with the state’s strategy to achieve Insurance coverage in the market.

Ambassador Nabila Makram added that the personal accident document will be made available to Egyptians working abroad, which was approved by the Financial Supervisory Authority, to be implemented, to cover Egyptians working abroad who hold work permits, in cases of death for the return of the body, within the limits of an insurance amount of 100,000 fairy.

The Minister of Immigration said that it was agreed between the insurance pool that the subscription should be:

The Minister of Immigration added that some of the articles of the statute of the Egyptian Association for Travel Insurance were amended to be in line with the addition of personal accident insurance for Egyptians working abroad, and were approved in implementation of what was agreed upon in the protocol signed between the Ministry of Immigration, the General Authority for Financial Control and the Egyptian Insurance Federation during the insurance conference. And reinsurance in Sharm El Sheikh last September.

Ambassador Nabila Makram expressed sincere thanks to the Minister of Interior, Major General Mahmoud Tawfiq, for his support of the initiative and for issuing directives for speedy implementation, as well as to Dr. Mohamed Omran, Chairman of the Financial Supervisory Authority, Alaa Al-Zuhairi, President of the Egyptian Insurance Federation, and other concerned parties, for coordinating and cooperating to issue this document in an integrated manner worthy of our citizens Abroad and meet their needs, especially those in the Arab Gulf countries.

The Ministry of Immigration signed a memorandum of understanding with the Financial Supervisory Authority and the Egyptian Insurance Federation, during the Sharm El-Sheikh Insurance and Reinsurance Forum, with the aim of cooperating in the field of providing insurance protection for Egyptians working and residing abroad, especially in the Arab Gulf countries, through the issuance of an optional insurance policy that provides coverage Insurance in cases of accidental death, the transfer of bodies and the occurrence of accidents, and the disbursement of appropriate compensation, in coordination with the concerned authorities.

The article learned about the details of issuing the first insurance policy for Egyptians working and residing abroad, which was written in Al Borsa newspaper.