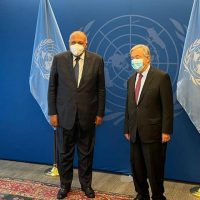 Foreign Minister Sameh Shoukry met today with Antonio Guterres, Secretary-General of the United Nations, at the conclusion of his current visit to New York.

Ambassador Ahmed Hafez, the official spokesman for the Ministry of Foreign Affairs, stated that Minister Shoukry began the meeting by congratulating the Secretary-General on the success of the opening of the 76th session of the General Assembly, despite the circumstances related to the Corona pandemic, and the activities and deliberations witnessed in the work of the General Assembly focused on pushing forward working mechanisms international multilateralism and strengthening the architecture of international peace and security.

Minister Shoukry also expressed Egypt’s appreciation and support for the efforts made by the Secretary-General and the United Nations and its specialized agencies in preventing conflict, building peace and achieving development goals.

Shoukry also reiterated during the meeting Egypt’s position regarding the Renaissance Dam file, and the need to reach a binding legal agreement on the operation and filling of the dam, in a manner that takes into account the interests of all parties, and as encouraged by the presidential statement issued by the Security Council in the middle of this month, as well as Egypt’s aspiration to continue supporting Secretary-General and the United Nations for efforts to achieve this.

Shoukry reviewed with the Secretary-General of the United Nations the national efforts made by Egypt in the framework of achieving the sustainable development goals, as well as Egypt’s active involvement in the areas of promoting human rights, especially with Egypt’s launch of the National Human Rights Strategy, as it is the first integrated and long-term self-strategy in the field of human rights. in Egypt.

The meeting also dealt with a review of all regional files and issues in the region, where the meeting witnessed an exchange of views in this regard, with an agreement on the importance of continuing to work towards pushing forward everything that would resolve crises in order to achieve the desired stability.

The article, the Minister of Foreign Affairs: Egypt is looking forward to the continued support of the United Nations to solve the crisis of the Renaissance Dam was written in Al Borsa newspaper.