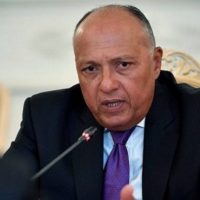 This came during the participation of the Minister of Foreign Affairs today in the high-level meeting on Sudan held via (video conference), on the sidelines of the work of the United Nations General Assembly, in the presence of Dr. One of the partner and friendly countries of Sudan.

The Spokesman for the Ministry of Foreign Affairs, Ambassador Ahmed Hafez, stated that Minister Shoukry was keen – during his speech – to emphasize what this meeting represents as an opportunity for all international partners to provide support and assistance to Sudan in its efforts to overcome the various challenges facing the country during the current transitional phase it is witnessing. .

The Minister of Foreign Affairs highlighted Egypt’s firm commitment to continue supporting the brothers in Sudan, expressing Egypt’s confidence that the various Sudanese parties will continue to adopt the same responsible approach they follow to overcome various political obstacles through dialogue.

Shoukry praised the economic reforms undertaken by the Sudanese government, referring to Egypt’s appeal to the international community to support economic development efforts in Sudan and to support the implementation of the provisions of the Juba Peace Agreement.

The article, Minister of Foreign Affairs: The security and stability of Sudan is an integral part of the security of the East African region. It was written in Al Borsa newspaper.