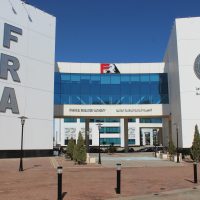 The Financial Supervisory Authority decided to stop dealing on the shares of Rowad Tourism Company “Ruwad” until the company provides the authority with the notification of the retail decision and its justifications, and the authority studies the justifications and responds to it.

The Authority decided to suspend all offers and applications registered on the company’s shares before publishing this announcement in light of the company’s board of directors’ decision approving the splitting of the nominal value of the share.

The board of directors of Rowad Tourism Company “Rowad” agreed to proceed with the procedures for splitting the nominal value of the share from 10 pounds to 50 piasters.

The Board decided to notify the Financial Supervisory Authority in accordance with the provisions of Article 48 of the Listing Rules.

The Board authorized its Chairman to present the justifications and feasibility of splitting to the Financial Supervisory Authority, as well as to invite the Extraordinary General Assembly after the approval of the Authority.

The board’s decisions included investing in the securities portfolio at an amount of 30 million pounds or more.

The Ordinary General Assembly of Rowad Egypt Tourism Company “Ruwad” ratified the election of new board members, including a representative of Target Real Estate Investment Company.

The shareholder (Ali Mahmoud Abdel Latif Mahjoub) raised his share in the capital of Rowad Tourism Company from 4.66% to 5.17% by purchasing 86.9 thousand shares.

The shareholder bought about 86.91 million shares of the company’s shares, with a total value of 4.58 million pounds, at an average price per share of 52.66 pounds per share.

The percentages of the shares of the groups linked to the shareholder are:

The Misr Insurance Holding Company reduced its share in the capital of tourism pioneers from 11.72% to 6.52%.

In a statement to the stock exchange today, the company stated that Misr Insurance Holding sold 900,000 shares of the pioneers of tourism for 46.179 million pounds.

The Board of Directors of Rowad Tourism Company “Ruwad” had agreed to authorize the Chairman and Managing Director to form a committee to restructure the MG group of companies, in light of the study of due diligence submitted by the Consulting House of Expertise office, with the aim of stopping the bleeding of losses for the group.

The company said that the MG group of companies in which Al-Raoud owns 94% of the capital, and its losses in December 2020 amounted to about 141 million pounds, unlike the losses last year of 19 million pounds, bringing the total accumulated losses to 160 million pounds.

The board agreed to contribute to increasing the capital of the “Dahab Sinai Manufacturing and Building Materials” company by 7 million pounds out of the total increase of 10 million pounds, bringing the company’s issued capital to 160 million pounds.

The company recorded a total profit of 11.9 million pounds during the year 2020, compared to 66.5 million pounds in total losses in the same period in 2019.

The company decided to contribute to increasing the capital of Dahab Sinai Company for Manufacturing and Building Materials, by 7 million pounds out of the total increase of 10 million pounds.

Banque Misr sold most of its stake in the capital of the Rowad Tourism Company, to reduce it from 9.48% to 0.03%.

The company stated that Banque Misr sold 1.635 million shares of the pioneers of tourism, with a total value of 22.724 million pounds.

The average selling price was 13.8942 pounds per share, and the Commercial International Securities Brokerage Company played the role of executing the deal.

It is worth noting that the Misr Life Insurance Company owns the largest share in the ownership structure of Rowad Tourism Company by 20%, followed by the share of Misr Insurance Holding by 17.44%, and then the shareholder Ali Mahmoud Mahgoub by 16.1%.

The article was written in Al Borsa newspaper, the financial control suspended trading on “Rawad” shares.