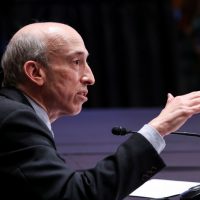 Gary Gensler, Chairman of the US Securities and Exchange Commission, said on Tuesday that the US market is in a better position to absorb a possible global shock from the bankruptcy of a major company than in the years prior to the 2007-2009 financial crisis.

Gensler’s comments follow a turbulent trading session on Wall Street on Monday in part due to investor concerns about the repercussions of a possible collapse of Chinese real estate giant Evergrande.

“I think we are in a better position in 2021 to absorb some of those shocks than we were before the 2008 crisis,” Gensler told the Washington Post in a live interview, referring to reforms adopted to strengthen the financial system in the wake of the global financial crisis a decade ago.

“But this does not mean that we are isolated, our economies are interconnected around the world,” he added.

The article Gensler: The US market is better able to absorb a potential shock than it was in 2008 written in the stock exchange.