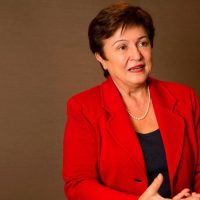 International Monetary Fund Managing Director Kristalina Georgieva said on Tuesday that major central banks have a responsibility to maintain clear coordination on their policy intentions as they turn to monetary tightening.

Speaking via video link from Washington, Georgieva told a seminar hosted by Bocconi University in Italy that she is “extremely anxious” to see central banks continue the high level of coordination they have seen during the COVID-19 pandemic.

That coordination has been “impactful and must remain,” she said, adding that major central banks have a responsibility to maintain “clear communication going forward” regarding policy steps they intend to take.

On the other hand, Georgieva said that Europe is now more prepared to avoid another debt crisis similar to the one that faced Greece after the 2007-2008 global financial crisis.

But, she added, countries will have to carefully plan how to shift the path to fiscal consolidation in the medium term to erase the growing debt burden associated with the pandemic.