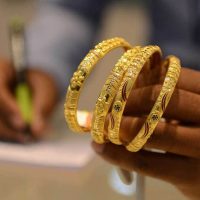 Gold prices rose in the local markets, during trading today, Tuesday, with a slight rise of an ounce on the global stock exchange, in light of a reluctance to risk and concerns about inflation, which increased the attractiveness of the yellow metal, but expectations that the US Federal Reserve would start reducing economic stimulus limited the gains.

Lotfi Munib, Vice President of the Gold Division of the General Federation of Chambers of Commerce, said that gold rose by 0.3%, to record an ounce at the level of 1761 dollars, and 21 karat recorded the level of 771 pounds.

The article, the rise in gold prices.. 21 karat records 771 pounds, was written in Al Borsa newspaper.