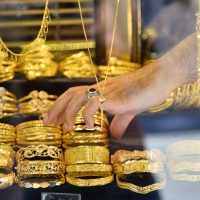 Gold was able to compensate for its losses in the local markets, during last week’s trading, after losing about 10 pounds, to conclude the week’s trading, achieving a 12 pound increase in prices.

Engineer Hani Milad, Head of the Gold and Jewelery Division at the General Federation of Chambers of Commerce, said that prices witnessed a rise at the end of the week, after it was subjected to a wave of decline, due to the rise of an ounce on the global stock exchange from the level of 1743 dollars to 1760 dollars.

Milad expected that prices would witness a new rise during the coming period, with fears of rising inflation and slowing growth rates in the US economy, due to the US Federal Reserve’s tendency to raise interest rates.

The article “Gold Rimontada” .. 21 karat rises 12 pounds within a week was written in Al Borsa newspaper.