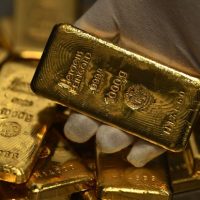 Gold prices rose slightly at the settlement of trading on Monday, after statements by a number of Federal Reserve members regarding the prospects for monetary policy.

Chicago Federal Reserve President Charles Evans said the US economy would soon meet the bank’s criteria for reducing its asset purchase program, but he expected not to raise interest rates before the end of 2023.

While Federal Reserve Board member “Lyle Brainard” explained that employment in the United States is still below the level required to start reducing bond purchases, warning of the possibility of continued weakness in employment due to the spread of the highly contagious “delta” variable from the “Corona” virus.

Federal Reserve Chairman Jerome Powell said after the monetary policy meeting last week that he expects to start reducing reserve purchases of assets in November, if inflation and employment continue to improve towards the target.

The price of gold futures contracts for December delivery rose by a marginal 0.02%, or 30 cents, to reach $1,752 an ounce upon settlement.

The dollar index, which monitors the performance of the US currency against a basket of six major currencies, settled at 93.352 points.

Article Gold marginally rises upon settlement after statements by Fed officials that were written in Al Borsa newspaper.