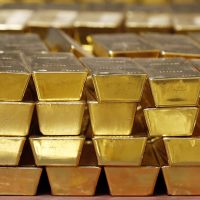 Gold rose in trading Thursday in Asia, after falling to its lowest level in seven weeks during the previous session, but rising US Treasury yields continued to put pressure.

“Gold is consolidating before falling in another major hit,” Ilya Spivak, currency strategist at Daily Forex, told Reuters, noting the Fed’s move toward asset deleveraging and an interest-rate-raising cycle much steeper than markets initially expected.

“While there are significant risks that could help gold higher, such as weaker economic data or the debt crisis in Evergrande potentially spreading to other economies, they are unlikely to provide lasting support.”

The article Gold is rising more than 2% during trading in Asia was written in Al Borsa newspaper.