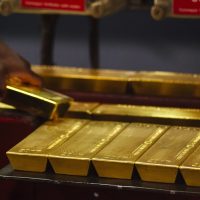 Gold prices turned lower at a 7-week low during Wednesday’s trading, while silver fell to its lowest level in more than a year.

Analysts at “OCBC Bank”, in a note transmitted by “Reuters”, expected gold prices to fall at 1,500 dollars by the end of 2022, especially with the completion of the reduction of asset purchases with the Federal Reserve by this period, and then its aspiration to start increasing the interest rate.

And the price of silver futures contracts for December delivery witnessed a decline of 3.9% to reach $21.58 an ounce, after reaching $21.42 earlier in trading, the lowest level since July 2020.

The dollar index, which monitors the performance of the US currency against a basket of six major currencies, rose 0.5% to 94.215 points.

The article: Gold turns to decline with the strength of the dollar, and silver touches the lowest level in a year that was written in Al Borsa newspaper.