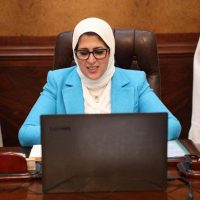 Hala Zayed, Minister of Health and Population, reviewed, during the cabinet meeting, the latest developments regarding the Corona pandemic locally and internationally, and the position of some countries on vaccination.

Zayed referred to the latest statements of the Director of the World Health Organization regarding the position of providing vaccines internationally, in which he indicated that Egypt is one of the first countries in the African continent that worked on the multiplicity of vaccine sources to ensure access to the greatest coverage of vaccines compared to most African countries.

With regard to the position of vaccines in Egypt, the Minister of Health said that the total number of vaccination centers nationwide reached 830, including travel offices.

Dr. Hala Zayed addressed the developments of the “Together We Reassure” campaign, which included coverage of 18 governorates since the launch of the campaign from 16 to 21 September, which are: Cairo, Giza, Alexandria, Kafr El-Sheikh, Beni Suef, Sharqia, Menoufia, Sohag, and Suez. Damietta, Assiut, Port Said, Gharbia, Minya and Ismailia, during which 45,500 citizens were registered on the ministry’s website to receive the vaccine.

The Minister of Health reviewed the ongoing equipment to receive doses of the “Pfizer” vaccine in a number of governorates, with a total storage capacity of 4.4 million, noting that 600 refrigerators were purchased and distributed to expand the equipment for receiving vaccines.

Zayed referred to the executive position of vaccination in various agencies, including the state’s administrative apparatus, the Ministries of Education and Technical Education, Higher Education and Scientific Research, and Al-Azhar Al-Sharif.

The Minister of Health referred to the plan to release and deliver the “Sinovac-Vaxera” serum during the period from September 18 to 24, 2021, with a total of 1.9 million doses. Noting that the total doses of these vaccines amounted to 33.7 million doses.

The article “Health”: 830 centers to receive “Corona” vaccines, and the “With Us We Reassure” campaign covering 18 governorates was written in Al Borsa newspaper.