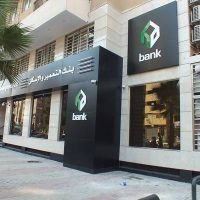 The bank intends to launch 3 branches at an investment cost of 110.7 million pounds

The consolidated financial statements of the Housing and Development Bank showed, during 2020, its profits declined 7.37%, to record 2.06 billion pounds, compared to 2.22 billion pounds in 2019.

Interest income decreased to 6.04 billion pounds, compared to 6.62 billion pounds in 2019, which was attributed by the bank to the rapid transmission of the impact of reducing interest on assets compared to deposits and certificates that appear to have an impact after their maturity.

The bank intends to reach its network of branches to 100 branches by launching 3 branches in 2021, at an investment cost of 110.7 million pounds.

He said that he signed a contract with the MasterCard Company, worth 2.7 million dollars, to issue MasterCard cards only for a period of 10 years, and that the value of the material support will be used to pay the cost of projects necessary to develop the card business.

He said that deposits were marketed through the Telemarketing Department for clients applying to reserve lands and residential units, and to attract them to open savings accounts in the bank and keep the value of the advances instead of leaving those funds again from the bank, and after communicating with 2,300 clients, 300 clients were attracted and opened accounts with balances of 18 million pounds.

He revealed that the valuation of his financial investment portfolio decreased 3.03%, worth 4.39 million pounds, after accounting for the coupons, even though the main stock market index fell 22.16%, to 51.5 million pounds distributed among 21 shares in 11 sectors.
He said that equity investment funds achieved capital gains of 1.8 million pounds and commissions worth 1.86 million pounds, with a total profit of 3.7 million pounds.

The fixed income governor achieved a return of 37.85 million pounds.

He revealed that the bank had launched many services and added advantages to the “money” portfolio, and that the total of the existing portfolios reached 232 thousand, including 90.5 thousand issued portfolios last year.

He mentioned that 25 automated teller machines were launched as part of the Central Bank’s initiative, in addition to accessing the bank’s teller networks to 317 machines, compared to 259 by the end of 2019.

The bank revealed that it had succeeded in renewing 94% of the bay roll contracts with companies, retaining about 63 companies out of 66 despite competition with banks, in addition to attracting 48 new companies, so that the number of clients whose salaries were transferred to the bank became 228 thousand employees at a value of 700 million pounds and the average stagnant amounts In customer accounts, it reaches 241 million pounds.

He noted that coordination is underway with the Central Bank and the Ministry of Finance to implement the project for replacing salary cards with a Meeza card.

Why decreased the operating cost of the bank?

Administrative expenses with the bank decreased by 146 million pounds as a result of a 5 million pounds wage bill decline, despite the 25% increase in salaries (first stage), in addition to the disbursement of monthly transportation expenses for all employees of the bank not affiliated with the car ownership system for workers, in addition to the payment of the 7% bonus applied by the state.

How much did the bank profit from the electronic reservation of the Urban Communities Authority units?

The bank obtained 17 million pounds as an electronic reservation commission for the units of the Urban Communities Authority, and achieved 13.8 million pounds in registration revenue on its website.