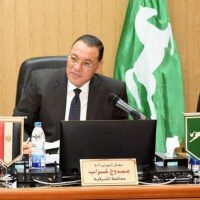 Dr. Mamdouh Ghurab, Governor of Sharqia, said that the paving and expansion of the Zagazig / Abu Hammad / Al-Abbasa road is underway, with a length of 24 km, at a cost of 99 million and 800 thousand pounds.

Ghorab stressed – during his inspection of the ongoing expansion works at the Saft Bridge, Abu Hammad Center, today, Sunday – that the company assigned to it must implement the paving and expansion works quickly to complete the project and adhere to the specified schedule and technical specifications, as it is an important traffic route linking Al Sharqiya with the cities and governorates of the Canal.

The governor added that a pedestrian tunnel is being constructed under the railway in Hehya, which is established at a cost of 9 million and 500 thousand pounds, and the percentage of implementation of works reached 70%, and it is expected that all works in the tunnel will be completed and will enter service by the end of next June .. indicating that the tunnel is a new traffic corridor that contributes to It breaks down traffic jams inside the city and works to avoid train accidents to save the lives of citizens.

The governor stressed that Dr. Sahar Lotfi, head of the city and center of Hehia, to follow up on the company assigned to carry out the works in the tunnel to finish it and enter the actual service to contribute significantly to breaking the traffic jams inside the city, stressing that the governorate, with its entire executive apparatus, is making every effort to improve the services provided to citizens in all Domains.

He confirmed the construction of a reinforced concrete wall on the Bahr Abu Al-Akhdar Bridge as part of the ongoing expansion works on Abu Al-Akhdar / Al-Manesterli Road in the first and second sectors, with a length of 14 km and a width of 8 meters in each direction in the areas of Zagazig and Hehya centers, at a cost of 79 million pounds.

He added that Nabil Farouk, Head of Zagazig Center and City, in coordination with the Director of the Roads Directorate, was confirmed to follow up on the company assigned to carry out the works on the road and to develop urgent solutions for any difficulties that might hinder the implementation work and the delivery of the project and its entry into actual service on time.

The article implemented 3 service projects in Sharkia, at a cost of 189 million pounds, and it was written in the Al-Borsa newspaper.