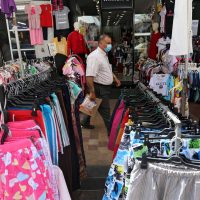 Al-Shami: 70 thousand importers are affected by the new decisions

Ready-to-wear importers expect an increase in prices during the upcoming summer season, following an increase in the tariff rates for import quota holders in the free zone by 10% on ready-to-wear clothes and 15% on second-hand clothes (bale).

Magdy El-Shamy, head of the Ready-to-Wear Division at the Port Said Chamber of Commerce, said that the new decision to increase the fees on holders of import cards in the free zone by 10% on “new” ready-made clothes imported from abroad will reduce imports during the coming period.

“Al-Shamy” indicated that the total number of import cards for “new” ready-to-wear importers reached about 70,000 cards, while used clothes amounted to about 46,000 cards.

He made it clear that the new decision would lead to some importers stopping or giving up the import card, and turning to manufacturing in the local market.

He expected that, during the next summer season, imported ready-to-wear clothes would witness a slight increase in prices. Given the new increases in the sector.

He added that he will hold an urgent meeting this week with Mohamed Saada, head of Port Said Chamber of Commerce, and some members of the division’s board of directors. To discuss the extent of damage to importers from the new decisions issued by the governor.

Major General Staff Adel Al-Ghadhban, Governor of Port Said, issued a decision to increase the prices of the free zone fees, according to the type of goods, which reached 10% for ready-made clothes, shoes, sweets, and household items, 15% for used clothes, 3% production requirements, and 6% For the goods that are imported from the investment zone.

Muhammad Kamal, the owner of a second-hand clothing store, in his area of ​​Al-Balah Agency, said that increasing the prices of import duties will cause prices to increase slightly.

“Kamal” indicated that the increase will not be felt by the second-hand clothing consumer. Given that it is slight, it starts from 5 pounds, and can reach about 20 pounds per piece.

He stressed that the spread of the Corona virus caused a decline in the demand for (bale) clothes, during the past month, although it was receiving a great response before that.

He continued: The “bale” clothes are 50% lower than the real price at which new clothes are sold in the shops and malls.

Abdulaziz Allam, the owner of a store selling used clothes, said that the new decision will affect the volume of merchants’ orders during the coming period. Given the study of consumer acceptance of the increase; Because the sector has been affected since the beginning of the pandemic during the month of March.

He emphasized that imported used clothes go through several stages before being sold to the consumer, which are «sorting, washing, ironing, and sterilization» to be displayed in the stores.

He explained that the European market is one of the most important markets supplying the Egyptian market, which was witnessing great popularity; Due to the quality of the clothes, the variety of models and their compatibility with consumers’ tastes.

The article “Import Quota Fee” pushing up clothing prices and shrinking imports was written in the Al-Borsa newspaper.