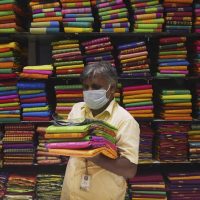 Indian business leaders are pressing for a de facto lockdown in India, and are calling on the government to take “strongest national steps” to combat the disastrous second wave of the “Covid-19” epidemic.

This comes despite experts believing that the real number is much higher, as the rise in cases overwhelmed health systems and revealed an acute shortage of vital infrastructure, such as oxygen supplies, hospital beds and the ability to subject citizens to an epidemic detection test.

But Prime Minister Narendra Modi’s government has fallen short of the comprehensive nationwide lockdown it implemented last year, fearing the devastating consequences for an economy still suffering from a previous shock.

The president of the Confederation of Indian Industry and chief executive of Kotak Mahindra, a private lending bank, Uday Kotak, said the government should take “maximum response measures nationwide.”

He continued: “We need to reduce economic activity and unnecessary services for a very short period to control the epidemic, while continuing to provide basic services, such as oxygen and the supply of medicines and foodstuffs.”

Kotak, India’s richest banker, explained that the government should use the time available during the lockdown to build the country’s medical capacity by building field hospitals, expanding testing and distributing more vaccines.

The second wave of the epidemic was so severe that many companies were forced to close or reduce their operations due to lack of industrial oxygen or due to illness of many of their employees or their families, according to the British newspaper, “The Financial Times”.

The newspaper pointed out that the Modi government has become increasingly sensitive to criticism, including criticism from the business community, which has been a stronghold of support for his administration.

The government was accused of failing to prepare for the second wave, which left health systems severely worn out when cases and deaths spiked in March.

The country also faces a shortage of vaccines. The CEO of the Indian Serum Institute, Adar Poonawala, told the “Financial Times” that the severe vaccine shortage in the country will continue until the end of July, that is, when it is possible to increase production.

The second wave of the epidemic and the possible closure risks what was expected to be a strong recovery for India’s economy, which contracted – according to International Monetary Fund data – by 8% in 2020.

Economists had expected a double-digit rebound this year before the latest wave, which led to sharp declines in consumer activity.

Although more subtle local restrictions this year allowed manufacturers and logistics companies to operate, the companies said it was not helpful when large sections of their workforce were sick or looking after their sick relatives.

The companies also warned that overcoming the latest shock may take much longer, despite the rapid recovery of consumer demand in India last year after the pandemic restrictions were eased.

“This crisis is deeper and more evident, and Prime Time Zone will respond differently to it. The fear raised in the minds of corporate managers, citizens and consumers will be much greater,” said the head of the Dalmia Holdings Group, Gaurav Dalmia. It is no longer just a statistic, we already know Prime Time Zone who have had the epidemic, and the recovery will be much slower. ”

The article Indian companies calling on government to restrict unnecessary economic activity was written in the Stock Exchange newspaper.