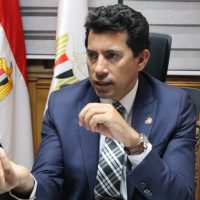 Dr. Ashraf Sobhi, Minister of Youth and Sports announced; For the first time in Africa, the World Anti-Doping Agency (WADA) agreed that Egypt would host the meetings of the Executive Office and the Board of Directors next year 2022, during the meeting of African Ministers of Youth and Sports to discuss ways to enhance anti-doping programs in Africa.

This came via video conference technology, and in the presence of the President of the World Anti-Doping Agency (WADA), Mr. agency officials; To discuss and discuss a number of files related to the agency and its work in Africa.

The meeting dealt with the approval of the World Anti-Doping Agency (WADA) for Egypt to host the meetings of the Executive Office and the Board of Directors next year, and the steps for establishing the African Educational Anti-Doping Academy in Egypt, which is considered one of the most important awareness and training centers in this field, and the first of its kind in the Middle East and Africa. It is expected that it will present workshops and scientific symposia to enhance its fields of work, provided that the membership of its board of directors includes prominent African personalities and relevant officials.

Dr. Ashraf Sobhi spoke about supporting the efforts of the World Anti-Doping Agency and spreading awareness of the dangers of doping on athletes, and that full coordination will be made with Al-Wad and Club officials regarding all arrangements and equipment for hosting the meetings of the Executive Office and the Board of Directors of the World Anti-Doping Agency, and achieving success for them in light of the superiority of the Egyptian state. In hosting major sporting events and tournaments.

The Minister expressed his thanks and appreciation to President Abdel Fattah El-Sisi, President of the Arab Republic of Egypt, for his keenness to support and consolidate diplomatic relations with African countries and his unlimited support for sports, explaining that the interest in the African side, the growing problems and its future outlook, and clean sports from an African perspective were at the forefront of the conversation with the head of the IAEA for doping, praising the efforts made by the agency on the African continent.

Dr. Ashraf Sobhi indicated that this comes within the periodic meetings, to enhance international cooperation in the field of anti-doping, and to emphasize Egypt’s pivotal role at the international level to make sport free of doping.

The head of WADA referred to the agency’s efforts to spread and increase anti-doping laboratories, including the Egyptian laboratory, and thanked the state for its additional contribution in supporting the agency’s scientific research and tests in a way that enhances the agency’s role at all levels.

He stated that what he saw from his visit to Egypt and the proposed accommodation and meeting with the Minister of Youth and Sports bode well for the impressive success of the activities of the World Anti-Doping Agency’s meetings.

The article “International Anti-Doping Agency” agrees to host Egypt for the agency’s meetings next year was written in Al Borsa newspaper.