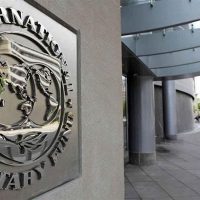 The International Monetary Fund confirmed that the economic stimulus package launched by the administration of US President Joe Biden will greatly support the conditions of the global economy, but it has warned policymakers of the need to anticipate the risks posed by the huge monetary injection.

Initial estimates by the International Monetary Fund indicated that the US plan would lead to expanding US gross domestic product by between five and six percent within three years.

“We are seeing the possibility of positive repercussions in terms of global growth, and most countries should benefit from strong American demand, and it will help,” said fund spokesman Jerry Rice – in a statement to the fund – that increased demand will help other countries sell more products to American consumers. That is to achieve global recovery and growth. “

An IMF spokesman said that with low interest rates, policymakers around the world must guard against the possibility of a sudden shift in lending rates.

The economic official played down concerns about the high rate of inflation, indicating that the rate could increase during the current year by about 2.25%.

It is noteworthy that the economic stimulus package launched by President Biden’s administration will lead to an injection of $ 1.9 trillion in aid to the economy that has been damaged by the repercussions of the Coronavirus epidemic, by financing small projects.