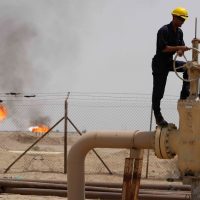 Iraqi Oil Minister Ihsan Abdul-Jabbar said today, Monday, that Iraq is considering buying ExxonMobil’s stake in the West Qurna 1 oil field in the south of the country through the state-owned Basra Oil Company, according to Reuters.

Minister Ihssan Abdul-Jabbar told a press conference that the ministry is considering the acquisition of Basra oil “Exxon’s share in West Qurna 1 and leading the project, as happened with Majnoon,” referring to the giant Majnoon field in southern Iraq.

Iraq said last month that ExxonMobil wanted to sell 32.7% in West Qurna 1 field, and that the Oil Ministry had begun discussions with US oil companies about a possible deal.

Exxon did not respond to a request for comment.

Abdul-Jabbar said in the press conference that the cost of developing the Iraqi Mansuriyah gas field on the coast near the Iranian border is expected to reach $ 2.1 billion.

China’s Sinopec won a deal to develop the field last month, in partnership with the Iraqi state-run Central Oil Company.

Abdul-Jabbar added that he does not expect oil prices to fall below $ 65 a barrel, and that the decline in oil prices will not be a cause of concern after OPEC + eases production restrictions from May.

Within the framework of plans to boost gas production, Iraq intends to invest three billion dollars in the Basra Gas Company over the next five years to increase production capacity by 40% to 1.4 billion cubic feet per day, the minister said.

Basra Gas Company is a joint venture between the state-owned South Gas Company, Shell and Mitsubishi.

The article “Iraq” considering buying Exxon’s stake in the “West Qurna 1” field was written in the Al-Borsa newspaper.