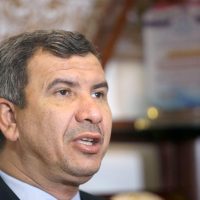 Iraqi Oil Minister Ihsan Abdul-Jabbar said today, Sunday, that oil has reached the price of 100 dollar The barrel will not be sustainable, he said, adding that OPEC aims to stabilize the market.

Abdul-Jabbar said in an interview with Sky News Arabia that he is working on a program aimed at increasing the country’s production capacity to eight million barrels per day, describing it as a “balanced capacity.”

The minister added that Iraq aspires to achieve the goal of increasing gas production to 4 billion cubic feet before 2025.

The article, Iraqi Oil Minister: Oil reaching $100 per barrel will not be sustainable. It was written in Al Borsa newspaper.