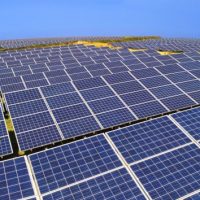 Planning is currently underway to build what may become the longest electricity transmission link in the world, and the former head of “Tesco” is participating in the group that plans it, and the project will provide Britain with additional supplies of renewable energy sources in Morocco.

X-Links laid out a blueprint on Sunday to build a £16 billion ($21.9 billion) undersea project, which will cover a distance of 3,800 km (2,360 miles). The project consumes energy from large-scale solar and wind farms in Morocco, which have a capacity of 10.5 gigawatts, and unlike other connections available in Britain, the project will supply power to Britain only.

Countries with different resources view these links as vital to them, and Britain plans to triple its electrical interconnection capacity in 2030. The government stressed the need to build more renewable capacity to replace gas that is subject to price fluctuations at the global level, and a crisis highlighted Recent energy highlights the need for alternative supplies.

“We treat this as power generation from afar, so it’s only for the UK energy market,” Simon Morris, founder and CEO of X-Links, said in an interview. That energy comes from an area that has totally different weather patterns and is not linked to each other, so it provides a huge amount of resilience to the British energy system.”

According to Dave Lewis, former president of Tesco and Paddy Padmanathan, CEO of ACWA Power, who are both members of the leadership team, the link could power 7 million British homes.

The X-Links project, which has a capacity of 3.6 gigawatts, is larger than the Hinkley Point C nuclear reactor of Électricité de France, and wind and solar power will be linked to a 5 gigawatt battery to allow the stored energy to be sent to Britain when needed.

The government uses the CFD financing mechanism for large renewable energy and infrastructure projects. X-Links says it is seeking £48 per megawatt-hour for the energy it will send to Britain, just over half the government-approved price for Hinkley.

Lewis said the company has been talking to the government about the project and is preparing to implement its own CFD financing mechanism.

The company also plans to build at least two factories to manufacture the necessary cables, according to Moresh, which would be a faster alternative to waiting for an existing company to be built. The project was fully funded until the financial close, which is due in the year 2023.

The article cost $22 billion. The longest line in the world to transmit electricity from Morocco to Britain was written in Al Borsa newspaper.