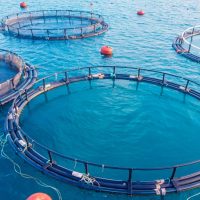 The Gogreen Company is studying with the Egyptian Agricultural Bank to obtain a loan of 500 million pounds to implement new expansions in the fish farming project in the Moghra area within the one and a half million feddans project.

Abdul Qadir added to Al-Borsa that the bank and the company have agreed to finance the project, while the interest value has not yet been determined, as part of the financing initiatives launched by the Central Bank to finance development projects.

He pointed out that the new expansions of the fish farming project over an area of ​​500 feddans, while the currently cultivated area reaches 30 feddans.

He pointed out that the idea of ​​establishing fish farms in desert lands is an ideal solution to provide organic fertilizer at no cost, stressing that the water for fish farming is natural fertilizer mixed with all the vitamins needed by most agriculture, and this water is also rich in ammonia, nitrates and phosphorous, as a result of the presence of fish inside.

The Egyptian Countryside Company signed with the company “Jogreen Jojoba Oils” the final rationing contracts for an area of ​​21 thousand feddans in the Moghra area in the Western Desert with a value of 500 million pounds, as part of the one and a half million feddans project.

This signature came in implementation of President Abdel Fattah El-Sisi’s program to complete contracting with investors who have proven their seriousness in agriculture and investment, and have committed to all contracting and pricing conditions, indicating that the “Jojoba” project is expected to be one of the best investment projects in Egypt and the Middle East during the coming period.

The article “Jogreen” plans to borrow 500 million pounds from the agricultural bank to expand the fish farming project was written in the Borsa newspaper.