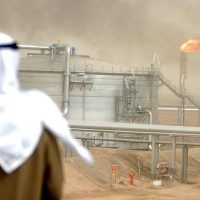 Kuwait reduced the official selling prices of two crudes it sells to Asia for the second month in a row in November.

It set the price of Kuwait Export Crude in November at 90 cents a barrel above the average offered prices for Oman and Dubai crudes, down 35 cents from the previous month.

The price cuts for Kuwaiti export crude are five cents lower than for Saudi Arabian Medium crude in the same month.

It also reduced the official selling price of Kuwait Super Light Crude in November to $1.80 a barrel above the prices offered to Oman and Dubai, down 15 cents from the previous month.

The article Kuwait, the decline in crude prices for Asia in November for the second month in a row, was written in Al Borsa newspaper.