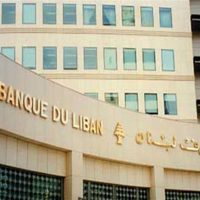 Gamal was a businessman so desperately in need of cash from his bank account in Lebanon that he agreed to a deal no one else in the world could do, selling a check for half its face value.

“Yes, someone took 50% of my money, but I was very happy to get it out of the bank,” said Jamal, who declined to give his real name.

Selling the checks was part of an arrangement to buy a property in Dubai, and for Jamal he got a good deal.

The British newspaper, Financial Times, reported that the political imbalance pushed the country on the Mediterranean coast towards a comprehensive economic collapse.

Last Saturday, two state power plants stopped working due to a lack of fuel, leading to a temporary blackout for the whole of Lebanon.

Two years ago, Lebanese banks imposed strict restrictions on money withdrawals and foreign currency transfers, which led to a boom in the black market for checks with billions of dollars stuck inside banks, which were dubbed “local dollars” or “lolars.”

With the exacerbation of the economic and financial crisis in the country, the value of the “Lolar” checks declined to 15% of their face value, which reflects the lack of confidence in the Lebanese banking system.

Businessmen usually buy checks to deposit in banks to repay loans, but Sami Atallah, director of the Policy Initiative in Beirut, says that “more informed depositors have discovered that the money has gone out of the banking system and they no longer have confidence in the banking system or that the government will compensate them or that they They will get that money back.”

The problem stems in part from the deep intertwining between the central bank and the state, as nearly 70 percent of financial assets were exposed to the heavily indebted country, according to the World Bank, including a large portion of non-performing euro bonds.

The previous government estimated in 2020 that the Banque du Liban alone incurred losses of $50 billion.

The Financial Times indicated that more than 80% of the funds deposited in Lebanese banks are denominated in dollars, but the dollars deposited in banks before the crisis can only be withdrawn in the Lebanese currency, priced at 3.900 pounds against the dollar, which is lower than the parallel price on the black market. Which means that depositors lose 80% of their money every time they withdraw their money.

However, the country almost prohibits foreign exchange, even withdrawals in Lebanese pounds are restricted and checks in local currency are sold at discounted rates.

The article Lebanese depositors cash their checks at half price was written in Al Borsa newspaper.