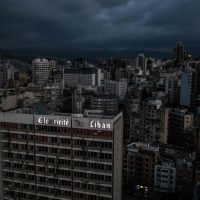 The Electricité du Liban (EDL) announced a complete decline in the electricity network without the possibility of rebuilding it again at the present time, in light of the difficult operating conditions and low production capacity on the one hand, and the continued existence of major transmission stations outside the control of the Corporation on the other hand.
The Corporation confirmed in a statement today that the Al-Zahrani power plant stopped working today as a result of the depletion of the gas oil stocks, in addition to the suspension of the Deir Ammar plant since yesterday morning for the same reason, which led to a decrease in the total supply to less than 270 megawatts, which directly reflected on the stability and stability of the network. It brought it down completely.
The Electricity for Lebanon said that it had previously warned repeatedly, several months ago, of the danger of entering into the forbidden with regard to electricity supply, and appealed to all concerned authorities for the sensitivity and accuracy of the situation, especially the need to agree to transfer the national currency surplus accumulated in its accounts as a result of the operations of collecting food subscription bills. In the current, to a hard currency according to the official exchange rate, in an attempt to cover part of its fuel needs, the necessity of energy production, noting that it had previously warned that if things continue as they are, there are high risks of reaching a general and comprehensive interruption on all lands.
She added that it is expected that the shipment of fuel oil (Grade A) will arrive this evening, which is expected to be unloaded in each of the tanks of the Zouk and Jiyeh stations early next week (starting on Monday), after the Ministry of Energy will ensure that its specifications are matched upon receipt. The results of the analysis of its samples from the laboratories of one of the specialized companies in Dubai, to be consumed after unloading its full load in each of the Zouk and Jiyeh generating stations, to be able, with the reverse engine stations in Zouk and Jiyeh, to try to raise the production capacity to about 500 megawatts.
The Electricité du Liban indicated that when the third shipment of the Iraqi exchange agreement was received, which is loaded with gas-oil and is expected to arrive at the end of this month, so that the institution will then be able to install the electrical network as much as it can.
On the other hand, EDL added that it is communicating with the oil facilities in Tripoli and Zahrani, to see if it can buy part of its limited quantities of Gas Oil to restart the Zahrani and Deir Ammar power plants for limited days only, to temporarily raise the production capacity to the limits of 500 megawatts, and thus stabilize The electrical network, until the completion of the shipment of fuel oil (Grade A) at the beginning of next week, and that the price of those quantities will be paid according to the $100 million loan between the government and the Banque du Liban, which the institution was informed by the Banque du Liban on Friday morning. The approval of the Central Council of the Banque du Liban.

The article, Lebanon: A complete decline in the electricity network, and there is no possibility to restore it at the present time. It was written in Al Borsa newspaper.