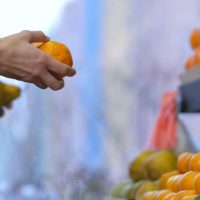 Cancellation of the prior import permit for some products.. and the acceptance of 3 new crops for the first time

The Lebanese Ministry of Agriculture announced changing the program for receiving Egyptian agricultural crops, as it canceled the prior import permit on some products, and announced the acceptance of new Egyptian products for the first time with the aim of feeding its markets in light of the economic crisis it is experiencing.

The Stock Exchange reviewed an official decision issued by the Lebanese Ministry of Agriculture, which allowed the import of vegetable and fruit products within the periods specified in the executive program to support trade exchange with Egypt without prior permission, with the exception of onions and potatoes, which will be reviewed during the season.

The decision allowed the import of 3 new products for the first time, namely (olive oil, apples, and citrus), but with prior permission throughout the year, in addition to the potato crop.

Egypt ranks seventh in the list of food suppliers to Lebanon, with an average value of more than $55.7 million annually.

Mohsen El-Beltagy, head of the Horticultural Crops Development and Development Association “Haya”, said that easing export restrictions from any country is of great importance for Egyptian agricultural crops, and facilitates the passage of products, especially perishable products, and thus larger contracts in a shorter period of time, other than reducing the general costs of export ».

The Lebanese Ministry of Agriculture subjected the Egyptian agricultural crops exports to the conditions of the remaining import permit for the first time in December 2012, and started it with the onion crop, then added the rest of the crops successively.

Sources told “Al Borsa” that the new changes come within the framework of the fundamental events that the Lebanese economy has been going through in the past short period, specifically since 2019.

The sources indicated that Lebanon is seeking to ease import procedures to meet its food needs in the easiest way possible, while maintaining safety factors as much as possible.

Since 2019, Lebanon has witnessed an accelerating economic collapse that has added burdens to food prices in particular, as they have jumped above 700% since that time, with an unprecedented collapse of the national currency against the dollar, and a shortage of fuel as well.

The article “Lebanon” is changing the program for receiving Egyptian agricultural crops. It was written in Al-Borsa newspaper.