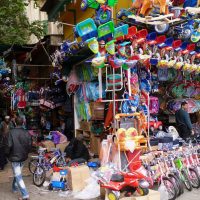 Despite the approaching Eid al-Fitr, demand is still limited for children’s toys, and prices are expected to rise and supply will decline during the coming period, in light of the increase in freight prices and the activation of the single window system at customs starting from next July.

Barakat Safa, a member of the Children’s Toys and Haberdashery Division at the Cairo Chamber of Commerce, said that demand is still limited for children’s toys during the current period, and that prices are stable and have not witnessed an increase despite the global rise in raw materials prices.

He expected the price increase and the shortage of supply in some items during the coming period. As a result of the recent decline in imports in light of hikes in international freight rates and delayed arrival of shipments.

He continued, “Importers have reduced their shipments recently in light of the doubling of freight rates from China several times, for fear of price jumps and failure to absorb the market.”

At the present time, the supply is still large .. but with time, it will decline, expecting the price increase by 20% after the end of Eid al-Fitr, with the activation of the new one-window program, which requires registering an import request to obtain approval first and then registering suppliers to reduce non-conforming goods.

For his part, Alaa Adel, deputy head of the children’s toys and haberdashery division at the Cairo Chamber of Commerce, said that the decline in consumer purchasing power reduced the demand for toys

He pointed out that a large number of children’s play factories have been established since 2016 and until now, estimated at about 30 factories, the majority of which depend on assembling products imported from China, as well as manufacturing about 20% completely in the local market.

He pointed to the stability of the prices of imported toys, while the prices of locally manufactured products increased by about 15%.

Mohamed El-Ashry, a member of the children’s play division at the Cairo Chamber of Commerce, said that the market is witnessing a severe decline in demand despite the approaching Eid al-Fitr.

He pointed out that the prices of products have remained stable despite the increase in shipping prices, but it is expected that the coming period will witness a halt in the import movement in light of relying on the new system in customs (the single window) until the situation stabilizes and the dealing mechanisms are known, and after that the import rates will return to their normal levels.

He continued, “We will witness a lull in the import movement in light of the importers’ state of anticipation to activate the new system.”

The article Limited Demand for Children’s Toys as Eid Al-Fitr approaches was written in Al-Borsa newspaper.