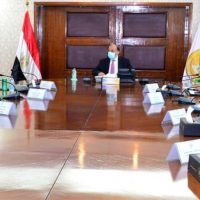 Shaarawy: An electronic system to track cars operating in the new waste system and receive complaints

Major General Mahmoud Sharawy, Minister of Local Development, held a meeting with a delegation from the “Enverwadite” company, which specializes in monitoring and follow-up systems for the management of the waste system, as part of the follow-up to the start of the actual implementation of the new solid waste system contracts in the eastern and western regions of Cairo Governorate, which is signed with the two companies “Irtiqaa”. and Enviromaster.

The meeting witnessed a review of the axes of the monitoring system and follow-up mechanisms that the company has completed with regard to the work of the new waste system in the neighborhoods of the eastern and western regions of Cairo. In the end, the state makes maximum use of the contracts signed between the government and the two companies, and the citizens’ satisfaction with the level of that service, especially in light of the state providing all the necessary facilities for the two companies for the success of their work during the last period.

The follow-up system developed by the company “Enverwadette” also includes an electronic system to track cars operating in the new waste system and receive complaints from more than one source, led by citizens in the neighborhoods in which the two companies operate, in addition to the hotlines in the ministry and the governorate and send them to supervisors in the companies to follow up on resolving complaints.

Shaarawy stressed the ministry’s readiness to cooperate with the company regarding the mechanisms of the monitoring and follow-up system for waste, especially with the actual start of implementing the new waste system in Cairo, after the two new cleaning companies officially received work in a number of neighborhoods in the eastern and western regions of the capital, in order to achieve full implementation of the contracts signed between the governorate and the two companies.

He added that the ministry is keen to find new mechanisms for oversight and follow-up to the new system in Cairo and to cooperate with companies specialized in this field to ensure the success of the system and achieve quick results on the ground.

It was agreed to continue communication between the company’s officials and the ministry and to present a technical and financial presentation on the method and mechanisms of cooperation between the two sides during the coming period.

The article “Local Development” is discussing with “Enverwadite” the creation of an application to monitor the hygiene system in “Cairo” that was written in Al Borsa newspaper.