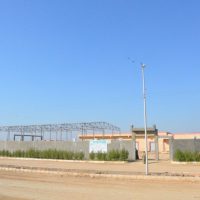 Luxor Governorate withdrew 35 plots of land from the Al-Baghdadi Industrial Zone after making sure that investors were not serious about implementing their proposed projects according to the feasibility studies submitted to the governorate.

Engineer Mustafa Abdel Halim, director of the Al-Baghdadi region, said that the governorate asked investors more than once to start construction work, while extending the permitting periods for them and studying their conditions to find out the problems that impede that, and after making sure that there were no problems and the purpose of landscaping and trading in it was withdrawn immediately. .

Abdel Halim added to “Al Borsa” that the governorate asked the Al-Baghdadi area to submit a report on the unused lands, in addition to the late investors in the construction work, and indeed the area submitted its report with the demands and a committee was formed to withdraw those plots.

He pointed out that these lands are distributed over a number of industrial sectors, including food, chemical and engineering industries, and building materials.
He stated that in the coming period, these lands will be prepared by the governorate to re-purchase them to serious investors through the investment map, in implementation of the Prime Minister’s decision.

Prime Minister Mostafa Madbouly asked, last month, the General Authority for Industrial Development and Administrative Control to review the position of industrial lands, which were previously offered, and to follow up on the implementation rates of the projects targeted to be established on them.

He pointed out that in the event that the seriousness of investors who obtained industrial lands through government proposals over the past years was not proven, after the completion of the inventory, legal measures will be taken against them.

The article “Luxor” withdraws 35 plots of land from non-serious investors in “Al-Baghdadi Industrial” was written in Al Borsa newspaper.