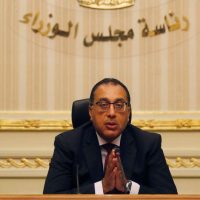 Prime Minister Dr. Mostafa Madbouly and his accompanying delegation concluded their visit to Luxor by inspecting the Luxor Temple, where he toured around the temple, to learn about all the elements of development it is subject to, as part of the project to revitalize the grand procession road known as the “Road of Rams.” In preparation for a major celebration to promote Luxor Governorate, “Luxor in its new dress.”

The Prime Minister listened to an explanation from Dr. Khaled El-Anany, Minister of Tourism and Antiquities, about the development work of the Monument of King Ramses II, the edifice of columns, and the courtyard of Amenhotep III. Two statues of King Ramses II also on the western facade overlooking the Nile, with the completion of the installation of 5 heads and crowns for the statues of King Ramses II in the first courtyard, as well as the completion of maintenance and restoration of the 14-column corridor and walls in the hall of King Amenhotep III, in addition to the restoration and maintenance of the walls of Alexander the Great’s cabin.

Al-Anani added that the development work also included the completion of the restoration of the walls of the ceremonial hall of King Tutankhamun, removing the old entrance to the Luxor Temple and raising the walls with stones, in addition to planting palm trees on the side of the Rams Road to add an aesthetic shape to the archaeological site, as well as the construction of a new gate to the temple. From the eastern side, under the supervision of the Engineering Authority of the Armed Forces within the visual identity project, which aims, with regard to temples, to implement banners bearing the stamp of identity in all Luxor temples, while providing those temples with booths and wooden umbrellas bearing the character of the city’s visual identity.

The Prime Minister praised the development work, and directed the coordination of lighting works in the Luxor Temple and its surroundings, in a manner that is in line with the civilizational pattern of this site, and to highlight the temple and its splendor. He also reiterated the need to finish painting the houses surrounding the temples.
He also witnessed the process of installing crowns for a number of statues in the temple, after their restoration, in an event that has not been repeated for hundreds of years, as the last period witnessed the re-installation of crowns over the statues again, and he praised the implementation of professionalism and high skill and with Egyptian hands, by the restorers of the Supreme Council of Antiquities.

The article Madbouly concludes his visit to Luxor by following up on the project of reviving the Great Processions Road in a night visit to Luxor Temple, which was written in Al Borsa newspaper.