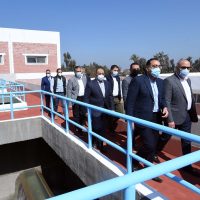 During his visit to Menoufia Governorate, today, Dr. Mustafa Madbouly, Prime Minister, inspected a number of projects that are being implemented in Al-Bagour Center, including the drinking water plant in Al-Bajour.

He was accompanied during the tour by ministers: water resources and irrigation, local development, health and population, housing, utilities and urban communities, trade and industry, and the governor of Menoufia.

The Prime Minister listened to an explanation from Dr. Asim Al-Jazzar, Minister of Housing, Utilities and Urban Communities, about the components of the Al-Bajour water station and its executive position As it was indicated that it is located on an area of ​​8 acres, and it is planned that its capacity will reach 34 thousand m3 / day, at a cost of about 808 million pounds, and it is planned that this station will serve about half a million citizens distributed over the city of Al-Bajour, and all the affiliated villages. The center has 48 villages.

The Minister stated that the civil works of the station include intakes, a cloudy water well, a building for turbid and filtered water pumps, a distribution well, and a building for filters. These works also include two ground tanks, a cylinder and chlorine injection building, semi-liquid tanks, alum buildings, slurry pumps and transformers, generators, and buildings. Other administrative.

The Minister also indicated that the implementation of the civil works at the station has ended and is being delivered, and the Prime Minister listened to the executive position of the station’s electromechanical works, where all the tasks were supplied and installed, except for 6 submersible pumps in the alum building, the ground tank, and the cloudy and filtered water building, and the supply of suction pumps is being completed. , 3 HMI monitors were installed.

With regard to the station’s networks and water lines, whose lengths reach 90 km, it was noted that they will be implemented in two phases. The first is 30 km long, and the second is about 60 km long. It has also been noted that in the first phase, 30 km were connected and the health samples taken were successful. To feed the city of Al-Bajour and 8 villages, including Kafr Al-Bajour, Sanjelf, the new Kafr Sanjelf, Fisha Al-Soghra, Al-Atrasha, the new facility, Abu Snaita and Asrijah, and with regard to the second phase, 30 km have been implemented and the rest of the network is being completed; To feed the remaining villages, with 40 villages, which are scheduled to be completed by the end of this year.

The article “Madbouly” inspects the Al-Bagour water station … that serves half a million citizens in the center and its affiliated villages. It was written in Al-Borsa newspaper.