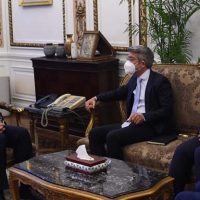 Dr. Mustafa Madbouly, Prime Minister, met this morning with Dr. Walid Fayyad, the Lebanese Minister of Energy and Water. The meeting was attended by Eng. Tarek El-Molla, Minister of Petroleum and Mineral Resources, and Ali Al-Halabi, Lebanon’s ambassador to Cairo.

The Prime Minister began the meeting by expressing Egypt’s wishes of success for the new Lebanese government headed by his brother, Prime Minister Najib Mikati, stressing that the directives of President Abdel Fattah El-Sisi, President of the Republic, always emphasize providing all possible support to brotherly Lebanon, especially at this delicate stage it is going through. .

For his part, the Lebanese Minister of Energy and Water stressed that he was keen to make Egypt the first country he visits after assuming his duties, in appreciation of Egypt’s pivotal role in the Middle East and its efforts to support and support Lebanon.

Fayyad reviewed the results of the talks he held with the Minister of Petroleum and Mineral Resources Tarek El Molla, to transfer Egyptian gas to Lebanon; In order to contribute to solving the electricity crisis.

In this context, the Lebanese Minister expressed Lebanon’s appreciation and thanks to Egypt and its leadership for the constant support and assistance from the big sister Egypt to Lebanon and its Prime Time Zone, stressing the Lebanese government’s aspiration to enhance and revitalize aspects of cooperation with Egypt during the coming period.