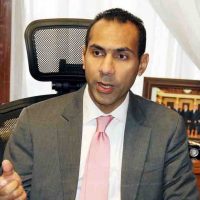 Banque Misr seeks to expand in specialized investment funds that focus on new activities in the market, such as index funds, gold and real estate.

Akef Al Maghribi revealed, vice The Chairman of the Board of Directors of Banque Misr, that Banque Misr, in partnership with its investment companies, is studying the launch of the first index fund (ETF) in the region that simulates the Refinitiv AFE Low Carbon Index.

The index includes companies in the Middle East that work to reduce carbon emissions resulting from their activities and meet the Environmental, Social and Administrative (ESG) standards.

Akef added, in an interview with the Stock Exchange, that the bank also intends to launch the first open-ended fund that allows investment in gold in the local market.

He said that the real estate investment fund launched by the bank is expected to start its activity during the current year, noting that the fund targets the existing commercial assets that generate revenues.

He stated that Banque Misr is one of the most important supporters of the investment fund industry in Egypt, and Misr Capital, the investment arm of the bank, launched the “Every Month” fund, which invests in fixed income instruments during the last month.

He said that the bank had finished establishing The Pyramid Company for Direct Investment as the first company in the Egyptian market to invest in small and medium-sized companies and projects under the umbrella of the Financial Supervisory Authority, with an initial capital of 10 million pounds paid in full, and is studying contributing to the capital increase.

He added that the bank, in cooperation with the National Bank of Egypt and six banks, is working to establish a company that aims to deepen the production of the local product and increase exports in order to reduce the trade balance deficit.

He pointed out that the company focuses on the engineering, chemical, building supplies, textiles, and agricultural sectors. To activate the directives of the President of the Republic in order to initially support investment opportunities, and work to increase the competitiveness of the local product by providing services to companies, whether financial, by providing financing to companies or by increasing their capital, advisory services, as well as providing information on foreign markets.

He pointed out that the company will work to create communication channels to implement joint export deals if the demands exceed its production capacity, thus enhancing its ability to export, and will also work to find a suitable investor if the companies wish to join new shareholders in their ownership structure.

On the other hand, Akef said that the bank contributes to two start-ups in the field of financial technology, but the number is more than that if the bank’s various investments are considered between ownership tools and hybrid financial tools that contribute to achieving the best investment risk management, and in line with the nature of each institution. invest in it.

He stated that the bank, in general, is constantly keen to explore various investment opportunities that contribute to achieving good returns on the medium and long terms, and contribute to enhancing the bank’s financial inclusion.

He said: “We always follow up on companies working in the financial technology field by holding many meetings with companies registered in the Startup Protection Fund and various business incubators. The bank maintains good relations with all parties of the industry and companies operating in the market in order to learn about the latest developments in the industry and seize various investment opportunities, whether by entering directly to invest in these companies, or investing in those companies through venture capital investment funds in which the bank has a strong presence.

He said that the bank seeks to attract foreign investments and inject them into its companies, as this will increase their technical and financial competitiveness, by transferring global expertise in operation and management.

In terms of lending, Akef said that Banque Misr will contribute to 21 joint loans during 2021 worth 130.3 billion pounds, and Banque Misr’s share will be 57.1 billion pounds, distributed over the sectors of real estate investment, public services, petrochemicals, building materials, maritime and river transport, land transport, communications, electricity, oil and gas.

He stated that the user volume of the syndicated loan portfolio at the end of July recorded 145.6 billion pounds, an increase of 158% over the volume of users in July 2020.

He stated that at the level of Islamic financing, the bank contributed to 4 joint facilities during the current year in the real estate investment and contracting sector, and the size of the bank’s contribution to these facilities amounted to 3 billion pounds, and the volume of the joint facilities portfolio at the present time is about 4.5 billion pounds, compared to 3 billion during the previous year. Same period last year with a growth rate of 50%.

He added that the volume of the real estate finance portfolio at the end of last August in the central credit sector exceeded EGP 70.6 billion, in addition to Islamic finance that exceeded EGP 3.15 billion.

He stated that the bank is studying the financing of a number of residential projects in the administrative capital in preparation for offers of financing grants, other than the participation through Islamic finances in financing contractors in the new administrative capital to implement real estate projects assigned by the New Urban Communities Authority, and the bank’s share in those funds amounted to 3 billion pounds.

Al-Maghraby revealed that, during the last 3 years, the bank arranged and participated in 10 joint loan operations for the sector, with a total value of 28.4 billion pounds, of which its share amounted to 12.5 billion pounds. In financing one billion pounds.

Al-Maghraby stated that the bank concluded 13 protocols to finance middle-income units within the Central Bank initiative, with the most prominent entities, the Suez Canal Workers Syndicate, the Ministry of Interior Land Projects Fund, Beta Egypt, City Edge, the Chamber of Real Estate Developers, the Housing Finance Fund, Aswan Governorate, the Armed Forces Housing Fund and the Syndicate Employees of Sohag University, the Syndicate of Engineers in Luxor, the Syndicate of Sales Tax Workers and Misr Express Company.

Akef said that the bank strongly supports the initiatives of the Central Bank, whether real estate financing or replacing cars, in which the bank approved 2,919 requests out of about 4,939 it received, with a total value of grants that reached 682 million pounds.

The Moroccan article for “Al Borsa”: Banque Misr is considering launching the first index fund that simulates the index of low carbon companies, which was written in Al Borsa newspaper.