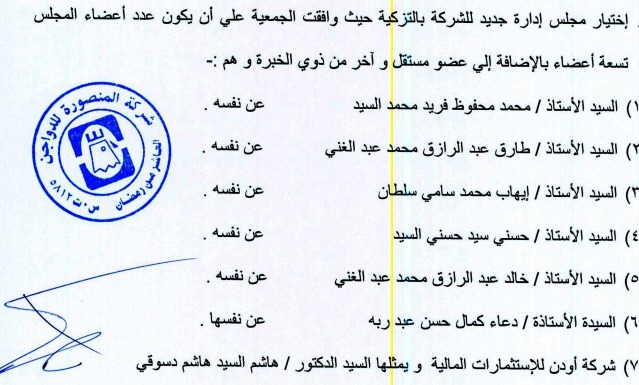 “Mansoura Poultry” invited its shareholders to attend the Ordinary General Assembly on March 27, to discuss the proposed dividend distribution project for the year 2020, and to elect members of the Board of Directors for the next session that ends 2023.

The General Assembly will consider the ratification of the company’s financial statements for the year 2020, and the report of the Board of Directors on the company’s activities in 2020.

Doaa Kamal Hassan Abed Rabbo, a member of the board of directors of “Mansoura Poultry”, reduced its share in the company’s capital from 9.22% to 3.3%, by selling about 1.2 million shares.

The contribution sold 1.201 million shares of Mansoura Poultry for 20.43 million pounds, with an average selling price per share within the deal of 16.99 pounds.

It is worth noting that the Insurance Fund for the employees of the Suez Canal Authority acquires the largest share of the Mansoura Poultry ownership structure by 9.8%, followed by Tariq Abdel Razek, Vice Chairman of the Board of Directors, at 5.17%.

Earlier, the extraordinary general assembly of “Mansoura Poultry” agreed to split the nominal value of the share from 4 pounds to 20 piasters per share, and to amend articles 6 and 7 of the company’s articles of association.

The general assembly approved the amendment of Article 21 of the company’s articles of association regarding the number of board members.

The Ordinary General Assembly agreed to evacuate and discharge the current chairman and members of the board of directors, and a new board of directors comprising nine members in addition to an independent member and another experienced member was chosen;

The article, March 27 … The general “Mansoura Poultry” looking into dividends was written in Al-Borsa newspaper.