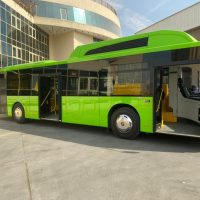 Ghabbour: 70% of the ingredients are locally made

MCV, the general distributor of Mercedes-Benz buses and trucks in Egypt, seeks to export shipments of locally produced electric buses to some export markets in Africa, Asia and Europe.

Karim Ghabbour, Chairman of the Board of Directors of “MCV”, said that the company seeks to export the electric bus, given the tendency of many countries to operate on electric power.

He explained that the production capacity of the factory reaches nearly 6000 buses annually, and the company seeks to export 60% of its production.

He referred to the design of the engineering drawings for the two “electric” buses and the other that works with natural gas inside the company’s factory in Egypt, with reliance on 70% of local products, and the remaining percentage from abroad.

The company’s new MCV C17 CNG natural gas bus came equipped with a EURO 5 cylinder engine, which indicates the flexibility of this engine’s performance and long operating life, and is available with an automatic transmission.

The length of (MCV C17 CNG) is about 12 meters, and it has 3 doors. It also has a special place for “Prime Time Zone of determination”.

The MCV C120 EV full-size electric bus is 12 meters long, and is able to travel more than 300 kilometers at a speed of up to 70 kilometers per hour before recharging.

Rafiq Nabil, head of the bus and passenger transport sector at the MCV Transportation Industry Company, told Al-Borsa that the company was able to increase its exports with the support of supply contracts for “Hong Kong” by about 150 buses.

Nabil pointed out that MCV had opened a number of new export markets, including the United Kingdom, Singapore, Hong Kong, Rwanda, and China during the past few months.

He continued: The last period witnessed great challenges for car manufacturers and those in charge of exporting projects to foreign markets, as a result of the stoppage of import and shipping movement to various foreign countries during the spread of the epidemic.

The article “MCV” seeks to export 60% of the electric bus production was written in Al Borsa newspaper.