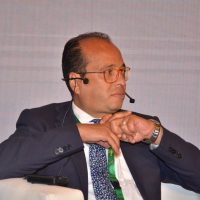 MetLife Life Insurance Company has raised the number of bank branches through which it promotes its insurance products to 270, according to the bank insurance mechanism, after its recent contract with First Abu Dhabi Bank.

Taher added to “Al Borsa” on the sidelines of the third Sharm Rendezvous Forum, which concluded last Wednesday in Sharm El-Sheikh, that the partnership with the five banks includes insurance protection coverage and investment products that suit different clients’ needs. Including education plans, child marriage, retirement plans, along with a wide range of living benefits.

According to Taher, the company’s expansion in “bank” banking insurance comes after the inclusion of “First Abu Dhabi” to the list of banks contracting with the company recently, to achieve the “MetLife” strategy to provide insurance products across all distribution channels and customer sectors of the contracting banks, as well as expanding the scope of benefit from coverage Insurance in a way that raises protection rates, enhances the volume of insurance sector premiums and the percentage of its contribution to the gross domestic product.

In the same context, Taher pointed out that the company recently designed a package of insurance coverage for the documents it presents through the branches of the banks contracting with it.

The Vice Chairman and Managing Director of “MetLife” indicated that the company’s premiums for the last fiscal year amounted to about 4.7 billion pounds, while the company aims to achieve annual growth rates with its reserves ranging from 10% to 15%.

He explained that the company paid about 2.9 billion pounds in compensation during the fiscal year, and what was related to Corona’s claims amounted to 180 million pounds, distributed between compensation for deaths and medical treatment.

According to Taher, the claims have been paid to clients since the beginning of the spread of the Corona virus, explaining that the value is distributed between compensation for deaths resulting from the virus in addition to the costs of treatment for Prime Time Zone infected with the virus, such as analyzes, x-rays, and others through the network of medical service providers to more than 3,400 providers, and contracting for 34 units. isolation.

“Taher” indicated that all services were automated to protect its customers from the virus and at the same time facilitate the performance of the service. Installments from bank accounts and credit cards.

According to Taher, the use of electronic claims submission through the MetLife website portals has been enhanced in order to facilitate the customers, as well as directing insurance benefits payments through bank transfers to customer accounts, which contributed to reducing the need for customers to come to the company’s headquarters to receive insurance benefits .

The article “MetLife Life Insurance” raises the number of banks promoting their products to 5, and was written in Al Borsa newspaper.